The CBRN Symposium took place in Berlin/Germany from 3rd to 5th September 2018. German Federal Ministry of the Interior, Building and Community, Federal Ministry of Defence, Federal Office of Civil Protection and Disaster Assistance, as well as the Bundeswehr CBRN Defence Command and the CBRN Working Group in the Association of the German Army supported the German Association for Defence Technology to prepare and to conduct the symposium. 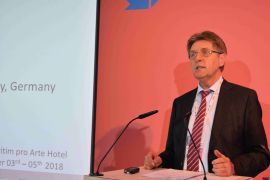 Objectives of the symposium were to provide a professional platform for encounters and exchange of the international CBRN protection community, and to inform representatives from the fields of politics, administration, industry, academia, civilian and military organisations about latest developments in security policy and provide an up-to-date risk assessment with a view to chemical, biological, radiological and nuclear risks and the challenges they represent for military and civilian systems when it comes to hazard prevention. And last but not least the symposium should, in particular, focus on three relevant areas for development of CBRN protection: National and international cooperation; the issue of prevention (averting hazard or damage situations in the first place) as the overriding principle when fulfilling CBRN protection tasks; and he efforts to create a resilient system, recognising its vulnerabilities.

The organisers subdivided the conference into two parts: a plenary session combined with two panel sessions, and an industrial exhibition <fig. 2>, as well as a live demonstration. All enabling components of CBRN defence were covered. The live demonstration took place in Schloss DIEDERSDORF. DEU presented mainly its civilian CBRN defence capabilities <fig 3>. A poster exhibition complemented the symposium.

Fourteen panels offered the opportunity to discuss the entire spectrum of CBRN defence, also such important ones as “Innovations by Industries” and “Innovation, Research and Development”.

Of course, in addition the Symposium offered an excellent networking opportunity <fig. 6>. 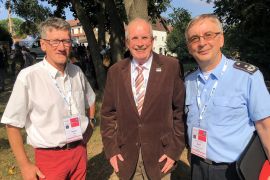