The 31st Doctrine and Terminology Panel was held at the French CBRN Defence Centre in SAUMUR from 15th to 19th October 2018. 29 delegates from 14 nations as well as from SHAPE, ACT-SEE, JFCBS, (MCMSB) MAROPSWG, and JCBRND COE met in a beautiful, small French city Saumur. Saumur is a commune in the Maine-et-Loire department in western France. The historic town is located between the Loire and Thouet rivers, and is surrounded by the vineyards of Saumur itself, Chinon, Bourgueil, Coteaux du Layon, which produce some of France's finest wines. 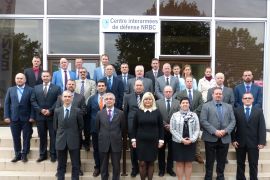 Chairperson LtCol Bernd ALLERT, JCBRND COE, opened the plenary session; he welcomed all DTP members detailing aim and of the meeting. DTP participants were informed about the highlights of the last JCBRND-CDG session, Programme of Work Evaluation Report (PoWER), and tasks addressing the Doctrine and Terminology Panel. As a next step LtCol Allert informed on the status of AJP-3.8 Ed. B (Allied joint Doctrine for Comprehensive CBRN Defence) which was ratified by nations and promulgated by NSO. 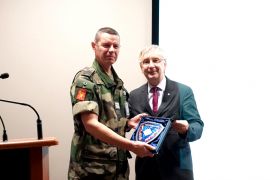 DTP secretary, LtCol Norbert DRZEWIC presented the outcome of the Allied Joint Operations Doctrine Working Group (AJOD WG). The primary mission of the AJOD WG is to enhance the effectiveness of NATO forces through the provision of doctrine for joint operations, with the emphasis on doctrine at the operational level. This includes development, review and harmonization of Allied Joint Publications within the hierarchy of Allied Joint Publications, as well as the formulation of related terminology. DRZEWIC was followed by custodian reports on ATP-3.8.1 Vol. I, II and III, and a presentation on the status of CBRN Defence Comprehensive Database.

Right after the plenary session DTP split into two syndicates: a Doctrinal Syndicate and a Terminology Syndicate.

The Doctrinal Syndicate focused mainly on ATP-3.8.1 Vol. I (PSD4). 59 comments (critical, substantial and editorial) were discussed; subsequently the nations determined the final structure and content of the publication.

The second main topic was a discussion on ATP-3.8.1 Vol. II. The revision of this publication started already in 2017 (according to the three years lifecycle). The DEU custodian, Major Sebastian HERRMANN, presented a proposal for a potential table of contents complemented by national proposals and comments.

The Terminology Syndicate’s aim was to continue with the revision of CBRN Defence relevant terms with a special focus on remaining terms from the so-called CBRN Master List. The Syndicate developed definitions for 29 new terms. At the end of the meeting, the syndicate leader informed that almost 90% of the 445 terms of the master list have been completed successfully.