On 21 September 2016, the Joint CBRN Defence Centre of Excellence was honoured by the visit of a delegation of Austrian Armed Forces. The high level delegation, consisting of General Othmar Commenda, Chief of Defence Staff of Austrian Armed Forces, Brigadier General Anton Wessely, Head of Training Division in the Austrian GS, Brigadier General Daniel Pregl, Austrian Defence Attache to the Czech Republic, and Colonel Robert Glanner, ADC to Chief of Defence Staff, met with leadership personnel of the Centre. The delegation was accompanied by the Czech Brigadier General Jiří Verner and Lieutenant Colonel Radovan Bočev. 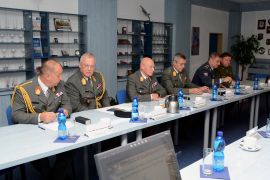 The Director of the Centre, Colonel Jiří Gajdoš, together with his Deputy, Colonel Volker R. Quante, gave a comprehensive overview of the Centre`s mission, tasks and activities. One of the main discussion points was, how the successful accession of Austria as Contributing Partner of the Centre in August 2016 can be used to foster and enhance future co-operation. 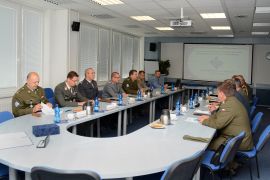 During a short visit, the Austrian delegation had the opportunity to visit the CBRN Reachback Operations Room and to get a first hand impression, how the scientists and CBRN experts provide first class support to the CBRN Defence community.

General Commenda promised to support the further development process and underlined the importance of the Centre’s role for the CBRN Community of Interest, not only in NATO, but in the Centre’s nations and in the European Union, too.