Consequence Management after a CBRN Incident Course was organized by the Joint CBRN Defence Centre of Excellence from 28 November to 2 December 2016. 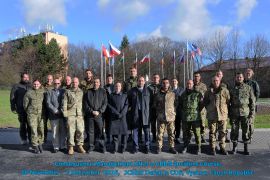 Consequence Management after a CBRN Incident Course was evaluated by students as very useful course with great added value for their careers’ development.

Next iteration is planned for 27 November – 1 December 2017. Follow the Training Portal for updates.