This three-day workshop was organized by NATO Modelling & Simulation Centre of Excellence /NATO M&S COE/ in Roma. The NATO M&S COE is a recognized international military organization activated by the North Atlantic Council in 2012, and is not under the NATO Command Structure. Partnering Nations provide funding and personnel for the Centre through a Memorandum of Understanding. Czech Republic, Italy, Germany and the USA are current Members and other Nations are in consideration.

Annually, the NATO M&S COE also organizes two major conferences. The Computer Assisted Exercise /CAX/ Forum is an annual conference among M&S professionals in NATO, Nations Industry and Academia to exchange ideas and share information about new technologies and initiatives within the M&S Domain, specifically focused on support to exercises. The second one is MESAS, an Inter-domain and Interdisciplinary exchange between M&S and Robotics communities to investigate the use of M&S to integrate Systems with Autonomous Capabilities in Operational Scenarios and to support Coalition Interoperability.

The main topics of MESAS for this year (based on the results of the previous workshop) included: Future Challenges and Opportunities of Advanced M&S Technology; Systems with Autonomous Capabilities /AxS/ and Swarming - R&D Application; M&S of Intelligent Systems – AI, R&D and Application and AxS in Context of Future Warfare and Security - Concepts, Application, Standards and Legislation. 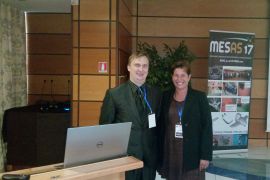 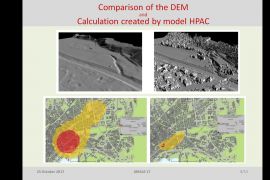 The presentation of the article “Experiments with the UAS Reconnaissance Model in the Real Environment” (auth. LTC Petr Stodola, LTC Jan Drozd, CPT Dana Kristalova and COL Jaroslav Kozubek) was presented. This paper presents experiments with the model of aerial reconnaissance in the real environment. The model has been integrated into the Tactical Decision Support System (TDSS) which supports Czech Army Commanders` military decision-making process. The model is focused on planning the optimal reconnaissance operation of the area of interest by a fleet of unmanned aerial systems (UASs). The paper also deals with other possibilities of using the model in the area of chemical, biological, radiological and nuclear defense (CBRN) where the geographical data for GIS and other SW applications are essential.