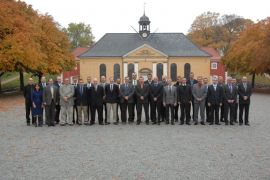 The 13th meeting of the DTP was held in Copenhagen, Denmark from the 25th to 29th October 2009. The meeting was chaired by LTC Manfred HAGEN (JCBRN Defence COE).

29 delegates from 13 NATO nations, the JCBRN Defence COE and NATO Allied Command Operations (ACO) as well as one NATO Partnership for Peace (PfP) nation (SWE) attended the meeting to discuss the progress achieved in the development of several essential CBRN doctrinal publications. The 13th meeting held in Copenhagen was characterized with a proactive approach from all participants, which bore fruit in the results achieved by all syndicates. This was a successful and very productive meeting. ATP-3.8.1 Vol.I will be promulgated in December 2009 and AJP-3.8 as well as ATP-3.8.1 Vol.III moved significantly towards ratification.