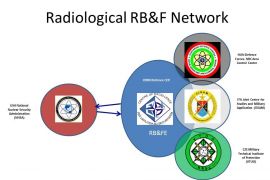 The focus of TNT-MIO experimentation was to examine the technical and operational challenges of searching and interdicting small watercraft and large cargo vessels which may be illegally transporting nuclear and radiological radiation threats.   The JCBRN Defence COE participated as the main Reach Back & Fusion Element (RB&FE), which had the task to assess radiological threats from spectroscopic and other related data sent via real time images, videos, instant messages and a variety of other means.  This experiment also involved other NATO and national co-operating institutions[1].  Special recognition must be given to the following NATO and Non NATO entities:  The NATO Maritime Interdiction Operational Training Centre (NMIOTC) which played the role of the experiment’s coordinator / Maritime Operational Centre (MOC) and provided the boarding teams, the radiological targets and all relevant facilities, the US’ Lawrence Livermore National laboratory (LLNL), the NATO Special Forces Headquarter (NSFHQ) and of course the main sponsor the NPS.  Global collaboration between remote and geographically dispersed partners was enabled using the TNT at NPS internet work spaces, enabling real time exchange of tactical data such as operator position, status reports, sensor data, observation reports, real time images and videos sent from boarding teams and swimmers.  The JCBRN Defence COE’s RB&FE cooperated with different Military scientific organizations via a dedicated internet cloud in order to respond as fast and accurately as possible to the requests for information.

Those organizations were the Czech Military Technical Institute of Protection, Brno, (VTUO), Italian Joint Centre for Studies and Military Application (CISAM), Hungarian Defence Forces, NBC Area Control Centre and the US National  Nuclear Security Administration (NNSA).  The scientific support represents the enabling function for any RB&F capability. The JCBRN Defence COE served as a conduit that allowed these centres to provide real time scientific and technical advice to operators in a maritime environment.  Test results indicated that the COE could provide relevant scientific and technical advice to Special Operations Forces boarding teams that assessed the type of radiological threat, the energy of the source and related protection measures required within 2 minutes of the initial RFI.  The element also provided a detailed report to the designated boarding team in approximately 9 minutes.

The experiment achieved remarkable success due to the exceptional organization of the NPS, the remarkable coordination of the NMIOTC as both the MOC and provider of all relevant facilities as well as the important support and contributions of all partners involved.

Even though this represents only some of the initial results of the RB&F experimentation, it demonstrated the ability to provide real time support to operations critical to non proliferation efforts.  The JCBRN Defence COE played a critical role during this experiment, always providing accurate subject matter expertise and support.  NPS plans to enlarge next year’s experiment to include chemical threats and the JCBRN Defence COE intends to provide an expanded level of support to ensure its success.