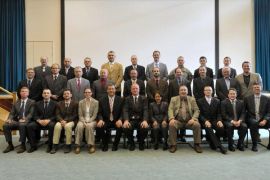 32 delegates from 12 NATO and PfP nations (BEL, CAN, CZE, DNK, FRA, DEU, ITA, NLD, POL, SRB, GBR and USA), NATO ACO, IMS, SHAPE, ACT, ONTC, JAPCC, and the JCBRN Defence COE attended the meeting, with the aim to develop a common vision regarding the new approach in CBRN Defence, and set the basic DTP agreement for the follow on work on related doctrine development.

The meeting resulted in a number of fruitful discussions, triggered by the new draft of the NATO Comprehensive CBRN defence Concept, which was presented by the NATO IMS representative. In conjunction with the IMS, the DTP contributed to the development of the concept by reviewing the high level CBRN terms referred to within the updated version of the document. Additionally, the DTP reviewed a remarkable number of CBRN related terms, following all relevant NATO procedures, in accordance with ONTC standards.

During the meeting, as agreed by the JCBRND CDG, a new syndicate was established in order to discuss how to include the three pillars approach and CBRN incident chain into the doctrinal work.  It was also discussed how to correlate the key functions and tasks of the draft NATO Comprehensive CBRN Concept with the implied CBRN defence tasks and recommendations (possible way ahead) to support the development of a common understanding among NATO nations for the follow on doctrine development.

The DTP reviewed the Study Draft 2 of the ATP-3.8.1 Vol. II.  After discussing all relevant comments from the Nations and additional issues stemming from the integration of the new CBRN approach, the custodian (DEU) developed the Preliminary Study Draft 3 with the view to begin the ratification process later this year.

The next meeting, to be held in Amsterdam, Netherlands from 23rd to 26th October 2012, is expected to be a very challenging one as we continue to make progress toward incorporating changes in our CBRN concept.