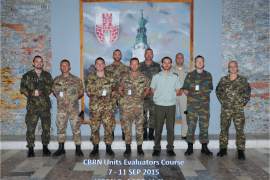 2015 iteration of CBRN Units Evaluators Course was conducted during the period 7 – 11 September.

The aim of the course was to prepare officers to achieve common standards in CBRN certification for evaluation of CBRN Defence units assigned to NATO Response Force Combined Joint Chemical Biological, Radiological and Nuclear Defence Task Force (NRF CJ CBRND TF). Although the CJ CBRND TF consists of CBRN Battalion (CBRN Bn) and CBRN Joint Assessment Team (CBRN JAT) the focus of the course were CBRN units (Recon, Decon, Bio, Lab). In addition, the aim of the course was to learn how to evaluate the CBRN units.

According to the student comment forms the course attendees were very satisfied with the course content. This year we incorporated many proposals from 2014 to improve the course content and introduced more syndicate works into the course program. There was more opportunity to work in teams, more experience sharing and more practical activities.