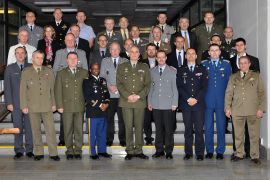 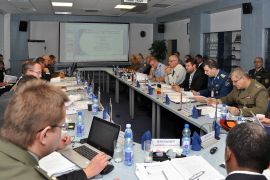 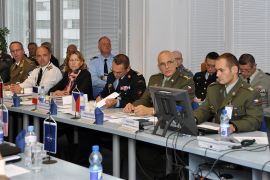 The aim of the meeting was to inform the Sponsoring Nations about the current status of the COE, the 2016 Multinational budget and the Programme of Work for 2016.
The meeting was evaluated by all participants as one of the most successful SC meetings, not only for high quality preparations but also for the new approach which was taken. The SC welcomed Austria’s intention to become a Contributing Participant of the COE which is a great opportunity for Austria as a Partnership for Peace nation and Sponsoring Nations to develop
a collaborative environment in CBRN Defence.
The SC approved the COE’s new Financial Administarative Procedures (FAP), which is a key document for managing internal financial actions in the COE.  The necessity to adopt a new FAP was acknowledged as a reflection of COE development. Speaking of development, the SC appreciated the Framework Nation’s intention to develop and coordinate an update of COE’s Memoranda of Understanding. These documents establish the relationships between the COE, the SC,  ACT and thanks to the COE’s progress and development, the SC found it necessary to update these ten-years-old Memoranda. Updating these Memoranda will help the COE  handle future challenges such as accepting Contributing Participants or concluding other arrangements codified by memoranda.
A feature of the approved 2016 Multinational Budget (MNB) is COE Enhancement project. This project consists of three parts of constructions: building a new parking area for COE members and visitors, constructing a dedicated entrance into the COE building and Area, and construction of a COE Monument with member-nation flags and a wall of honor. The project will clearly and finally emphasize the presence of an international military organisation in Vyskov and should also lift personnel of the JCBRN Defence COE whose hard work and dedication have helped to create one of the best evaluated COE within COE Network.
The next SC meeting will be held on 19 - 20 April 2016 in Vyškov.