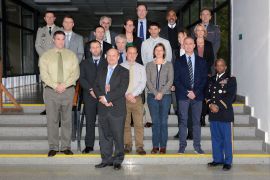 Meeting was held in Olomouc and agenda was focused on updates of NATO standards and publications concerning physical protection in framework of NATO document - JCG Priority Assessment and Work Schedule (JPAWS). The meeting was effectively conducted by Vice chairman LT (Navy) Pickering who welcomed new member of PPP coming from Australia. The members of PPP from 14 nations had a fruitful negotiation and they visited the Technical Institute facility Stone Cottage and the JCBRN Defence COE in the end of their busy week. During the JCBRN Defence COE visit PPP members were briefed about the role of the JCBRN Defence COE by Chief of Staff COL Flucker. Information about CBRN Reach Back (RB) Section position within the JCBRN Defence COE and within the NATO operations support by this functionality was provided by COL Lefebvre. The PPP members after then saw the top-class equipped RB operational room and got short briefing provided by LTC Canning.
The visits of Technical Institute facility Stone Cottage and the JCBRR Defence COE have crowned whole successful PPP meeting in the Czech Republic.