Another iteration of the OPS-NC-4002 CBRN Unit Evaluators’ Course was organized from 5 to 9 September 2016.

The aim of the course was to prepare officers and NCOs to achieve common standards in CBRN certification for evaluation of CBRN Defence units assigned to NATO Response Force Combined Joint Chemical Biological, Radiological and Nuclear Defence Task Force (NRF CJ CBRND TF). Although the CJ CBRND TF consists of CBRN Battalion (CBRN Bn) and CBRN Joint Assessment Team (CBRN JAT) the focus of the course were CBRN units (Recon, Decon, Bio, Lab). In addition, the aim of the course was to learn how to evaluate the CBRN units.

The guest speaker, Mr. Van Balveren, a retired NLD Air Force Lieutenant Colonel and now a professor at The Hague University of Applied Sciences (NLD) delivered a very comprehensive lecture on Force Protection (FP) and CBRN. Students were challenged with many problems and situations, were engaged in interesting discussion and got a view on FP/CBRN from a broader, inter-service perspective with experience from real live (NATO-led security mission in Afghanistan - The International Security Assistance Force [ISAF]).

The course was evaluated by the students as very useful with great added value for their carrier’s development. 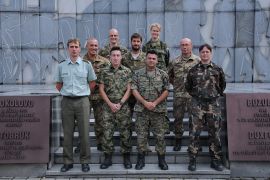 Next iteration is planned for spring 2017. Find more at our Training Portal.