Despite improvements being implemented in the civil and military biological defence, and consequence management after previous epidemics such as influenza A(H1N11), the COVID-19 pandemic has illustrated how the world and NATO were unprepared. The security and resilience of NATO depends substantially on NATO and its member states being prepared for future pandemics. 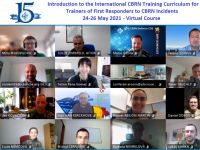 Within the civil-military cooperation framework, the Joint CBRN Defence Centre of Excellence (JCBRN Defence COE) and the BullsEye EU Project jointly organized a virtual First Responders Course between the 24th and 26th May 2021. 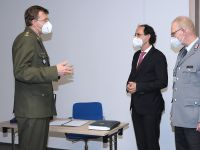 The German Ambassador to the Czech Republic, H.E. Dr Christoph ISRANG, visited the Joint Chemical, Biological, Radiological and Nuclear Defence Centre of Excellence (JCBRN Defence COE) in Vyškov, Czech Republic on 20 May 2021. He was accompanied by Defence Attaché Lieutenant Colonel (G.S.) Holger OSWALD. Lieutenant Colonel Oswald visited the Centre previously on 12 June 2020 to prepare for the Ambassador’s visit. The visit was hosted by JCBRN Defence COE Director, Colonel David MARTÍNEK (CZE-ARMY), and the Deputy Director, Colonel Wolfgang REICH (DEU-Army). H.E. Dr ISRANG has been representing the Federal Republic of Germany in Prague since 8 August 2017. He previously attended training to become a reserve officer within the German Airforce with the rank of Colonel. H.E. Dr ISRANG is also closely related to CBRN defence from his previous position as the German Permanent Representative to the Organization for the Prohibition of Chemical Weapons (OPCW) in The Hague from July 2014 to August 2017. By the way, since these days he knows Major František PAVLÁSEK, who is currently working for the Centre’s Transformation Support Department. 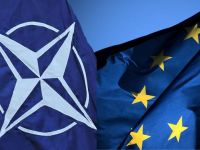 NATO has several tools, capabilities, and partnerships, such as with the EU, it can use to enhance Allied CBRN defence capabilities. These include Civil Preparedness, a fundamental part of NATO’s approach to CBRN defence. Civil Preparedness aims to raise awareness of the CBRN environment, advise NATO Allies and partners on managing the consequences of a CBRN incident, and share best practice. 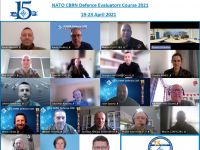 The aim of this training was to prepare personnel responsible for the evaluation of CBRN defence area for the NATO Response Force (NRF), achieving a common standard for CBRN certification.