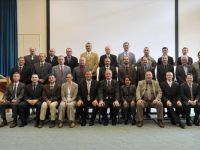 32 delegates from 12 NATO and PfP nations (BEL, CAN, CZE, DNK, FRA, DEU, ITA, NLD, POL, SRB, GBR and USA), NATO ACO, IMS, SHAPE, ACT, ONTC, JAPCC, and the JCBRN Defence COE attended the meeting, with the aim to develop a common vision regarding the new approach in CBRN Defence, and set the basic DTP agreement for the follow on work on related doctrine development.

The meeting resulted in a number of fruitful discussions, triggered by the new draft of the NATO Comprehensive CBRN defence Concept, which was presented by the NATO IMS representative. In conjunction with the IMS, the DTP contributed to the development of the concept by reviewing the high level CBRN terms referred to within the updated version of the document. Additionally, the DTP reviewed a remarkable number of CBRN related terms, following all relevant NATO procedures, in accordance with ONTC standards. 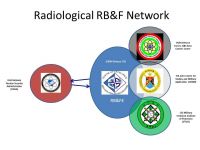 The focus of TNT-MIO experimentation was to examine the technical and operational challenges of searching and interdicting small watercraft and large cargo vessels which may be illegally transporting nuclear and radiological radiation threats.   The JCBRN Defence COE participated as the main Reach Back & Fusion Element (RB&FE), which had the task to assess radiological threats from spectroscopic and other related data sent via real time images, videos, instant messages and a variety of other means.  This experiment also involved other NATO and national co-operating institutions[1].  Special recognition must be given to the following NATO and Non NATO entities:  The NATO Maritime Interdiction Operational Training Centre (NMIOTC) which played the role of the experiment’s coordinator / Maritime Operational Centre (MOC) and provided the boarding teams, the radiological targets and all relevant facilities, the US’ Lawrence Livermore National laboratory (LLNL), the NATO Special Forces Headquarter (NSFHQ) and of course the main sponsor the NPS.  Global collaboration between remote and geographically dispersed partners was enabled using the TNT at NPS internet work spaces, enabling real time exchange of tactical data such as operator position, status reports, sensor data, observation reports, real time images and videos sent from boarding teams and swimmers.  The JCBRN Defence COE’s RB&FE cooperated with different Military scientific organizations via a dedicated internet cloud in order to respond as fast and accurately as possible to the requests for information. 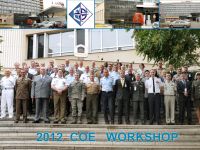 The Joint Chemical, Biological, Radiological and Nuclear Defence Centre of Excellence (JCBRN Defence COE) hosted the COE Program of Work Development Workshop from 12 -14 June 2012 in the Hotel International Brno, Czech Republic. This annual event was organized with close cooperation with the Transformation Network Branch (TNB) SACT HQ, who is the leading body for coordination of all COEs within NATO.  More than 50 representatives from a variety of organizations to include 17 Centers of Excellence, ACT, EUCOM, IMS, JFTC, JWC, SHAPE (OPD), and the US NDU attended the three day conference.

The purpose of the 2012 COE WS was to discuss and finalize the NATO Requests for Support (RFS) for inclusion in the respective 2013 COE Program of Works (POWs). The workshop offered a venue for the centers and other interested entities to meet with different Communities of Interest (COI), coordinate mutual support, and de-conflict 2013 events.

In accordance with the JCBRN Defence COE Program of Work, fourteen specialists working in physical protection arrived in Vyskov to participate in the Physical Protection Subgroup (PPSG) meeting held 14 – 17 May 2012.  Delegates from several NATO countries (USA, Canada, France, Germany, Great Britain, Denmark, the Netherlands, Belgium and Slovakia) and one Partnership for Peace Nation (Sweden) as well as several members of the JCBRN Defence COE attended the meeting.

The JCBRN Defence COE Deputy Director Colonel Janos Zelenak launched the gathering with some welcoming remarks that were followed directly by the Chairman’s update on the PPSG agenda.  During this fruitful meeting the delegates discussed numerous topics primarily focusing on standardization in their area of expertise.  At the end of the 3 day event all participants expressed their satisfaction with the results achieved.

Due to Vyskov’s proximity to the Austerlitz Battlefield, the COE arranged a tour of the Austerlitz Memorial and the Slavkov Chateau.  Both served as pivotal sites during the Battle of the Three Emperors in December of 1805.  The tour proved an informative cultural event and all the delegates who attended expressed their appreciation for the COE’s efforts.

The group devoted the last session to final remarks and conclusions. Then the PPSG chairman, Wing Commander R. P. Lumb, clarified the way ahead designed to coordinate and harmonize the sub group’s efforts until the next meeting scheduled for October of this year in Amsterdam.   Colonel Zelenak closed the meeting with the wish of a pleasant trip home to all attendees. 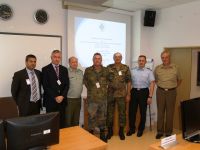 A delegation of German CBRN Subject Matter Experts represented by LTC Georg GNAN and LTC Thomas WOLF together with representatives of TMS Company, Mr. Norbert KOPP and Mr. Ibrahim Yücel AHI, visited the JCBRN Defence COE 15th May 2012. The overview briefing on the JCBRN Defence COE structure, organization and program of work was provided by the COE’s Deputy Director COL Janos Zelenak. He stressed that a potential mission for the COE is to be employed as an authority for validation of warning and reporting (W&R) and CBRN related software (SW) in support of NATO.

The TMS Company representatives introduced their software for warning and reporting, called NEWS, which is widely used within the German armed forces.  They also demonstrated their consequence of intercept and consequence of engagement hazard prediction software designed for the assessment of ballistic missile impacts called HEAT.

Discussion on possible cooperation in the area of validation of these software tools was fruitful and both sides agreed that the JCBRN Defence COE’s role as CBRN-related SW validation authority will be beneficial for NATO’s transformational and training processes.