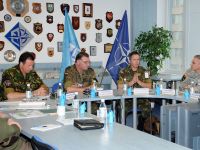 The purpose of their visit was the possible cooperation between the Dutch CBRN defence experts and the Joint CBRN defence COE.  The visit continued with presentations given at COL Janos Zelenak Conference room.  LTC Peter SCHALLENBERG in introduction informed the JCBRN Defence COE representatives about the overall situation in Dutch Armed Forces, CBRN defence development cooperation and focus of the CBRN position abroad.

After that COS Col Daniel Deadrich provided an overview of the JCBRN defence COE and the Department Directors briefly introduced their departments with focus on the possible mutual cooperation or the possible contribution/participation at the Joint CBRN defence COE. 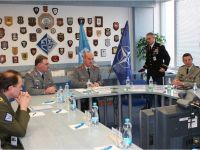 After the Command Briefing, given by the Chief of Staff, COL DEADRICH, the General were introduced by LTC COOPER into the infrastructure of the OpsRoom and the status of the newly implemented CBRN Reachback Coordination Element (RBCE). 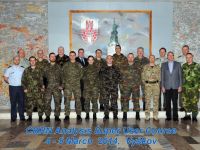 JCBRN Defence COE opened New Year 2014 with CBRN Analysis Super User course. One and half day long course is organized yearly based on the bilateral agreement between The Bruhn New Tech Company and JCBRN D COE.

Course is designed to introduce changes and improvements made in this Warning and Reporting software, which is current NATO standard for evaluation CBRN events/incidents based on the ATP-45 (E) and AEP-45 (C) documents.

This course will enable the students to perform as a local or national Super User Contact with sufficient knowledge to assist less experienced operators and to act as an advisor for establishing CBRN-Analysis communication and making exercises. 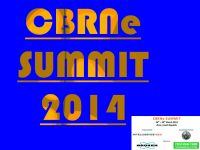 Intelligence-Sec’s CBRNe Summit 2014 will bring together senior officials from across Europe to discuss the latest CBRNe threats faced in the region. This event will allow attendees to hear in-depth presentations from senior government officials who will be discussing their detection techniques and how they counter CBRN threats in their respective country. By taking part in this international event it will allow you to gain further knowledge from European First Responders who will provide case study presentations on how they respond to a CBRNe attack.